I Saw From the Beach

Figure With Arms Down II

Breon O’Casey was born in London, the son of the playwright Sean O’Casey. In 1937 his family moved from London to Totnes in Devon. Here, Breon attended Dartington School where he was to begin to learn his craft.

Breon O’Casey was a highly productive and much-respected artist for many decades but his public reputation only spread beyond certain art and craft circles in his later years. He has been a jeweller, a painter, an etcher, a weaver, and a sculptor.

For most of his career, Breon O’Casey lived in Cornwall and was closely associated with the St Ives School of painters and sculptors. He benefited from his friendship with some of the leading artists of his generation such as Peter Lanyon, John Wells and Tony O’Malley. He studied for three years at the Anglo French Art Centre and was assistant to Babara Hepworth from 1959 to 1962. He was also assistant to Denis Mitchell in St Ives.

Although his gold and silver jewellery won him an international reputation, his handwoven creations have been targeted by knowledgeable collectors. His paintings, handmade prints and sculptures are also widely collected.

Wolf at the Door 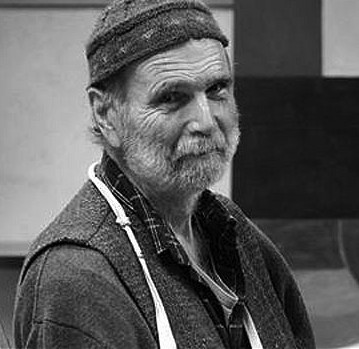