Bryan Pearce specialised in paintings of his home town, St Ives, and the surrounding Penwith area, drawn in typically flat style, with areas of bright colour surrounded by heavy outlines, like stained glass. His learning disabilities gave his art, in the words of Peter Lanyon, an “awareness more direct” than pure observation. Lanyon also said that “Because his sources are not seen with a passive eye, but are truly happenings, his painting is original”, and “It is necessary to accept these works as the labour of a man who has to communicate this way because there is no other.” His art has been compared to that of Alfred Wallis.

Guided by Denis Mitchell, he joined the Penwith Society of Arts in 1957, and the Newlyn Society of Artists. He had his first solo exhibition at the Newlyn Gallery near Penzance in 1959, and his first solo exhibition in London at the St Martin’s Gallery in 1962. Retrospectives were held at various venues from 1966 to 2004, particularly at Penwith Gallery in 1966, the Museum of Modern Art in Oxford in 1975, the Royal Cornwall Museum in Truro in 2000, and the Victoria Art Gallery in Bath in 2004.

Examples of his work are held by many public galleries. His business affairs were dealt with first by his family and ultimately by trustees, enabling him to concentrate on his art. In the second half of his career a good deal of his work was produced and sold in the form of prints in relatively small signed, numbered editions. Some of these were small hand-made etchings, with which the artist had a ‘hands on’ creative involvement; others were full size screenprints made by printer-craftsmen ‘after’ works in other media. The latter certainly render just over twenty of Pearce’s original images, with their pure, expansive areas of specific colours, extremely convincingly. 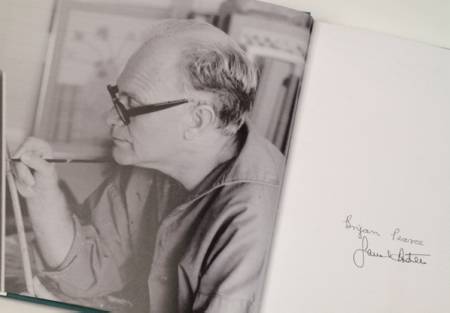