“I have always been fascinated by the precarious nature of existence and the underlying fragility of things which seem so stable and certain. I can remember as a boy spending hours balancing spoons and knives on the edge of my bowl, absorbed by the process and at the same time aware of the inevitable impermanence of the achievement.

“I began making simple mobiles as nursery decorations following the birth of my first son in 1997, but became interested in the more sophisticated sculptural possibilities of the form after seeing the work of Alexander Calder.

“I draw a lot of my inspiration from animal and plant forms. The work is often suggestive of skeletal structures, usually in the abstract, though sometimes more clearly resembling particular plants or creatures.

“The sculptures are intended to be enjoyed both as elegant, striking forms and as objects for contemplation and meditation.

“I find it intriguing that these apparently stable pieces are created from elements which are set up in opposition to one another in a series of weights and counterweights. Each sculpture outwardly expresses a settled tranquillity but actually relies for its existence on the internal tensions resulting from the action of gravity on the individual elements. Thus, every part of the sculpture is pulling against every other and at the same time all are working co-operatively to produce a resolved structure in a kind of ‘dynamic equilibrium’. 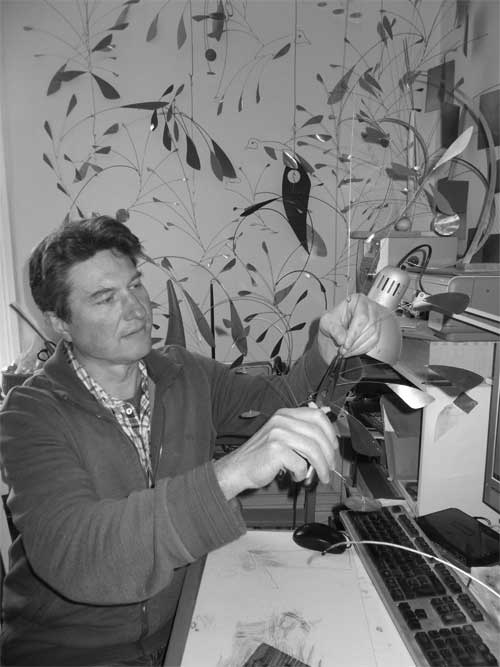